The garden in winter is as full of pleasure as at any other time of the year.  Flowers may not be as abundant as in spring nor as extravagant as in summer but they are here, and a lot of them are deliciously perfumed.  Even on the bleakest of midwinter days the heady air around many shrubs is intoxicating.

Winter flowers have evolved to cope with the rigours of cold winds, snow and rain by being small, often barely perceptible.  To appeal to any of the fearless pollinators that are about at this time of year many plants use scent.  Insects and bees are few and far between, so perfume has to be strong enough to carry a long way.  Walk within five metres of the Christmas box, Sarcocca confusa, and you will be turning around to find out where its powerful, sweet smell is coming from.   It seems inconceivable that the ragged bunch of tiny petals, hidden among glossy evergreen leaves, could produce such a fragrance.  Sarcocca hookeriana var. digyna has an even stronger scent – almost overpowering, as anyone who has ever brought a stem into the house will know. 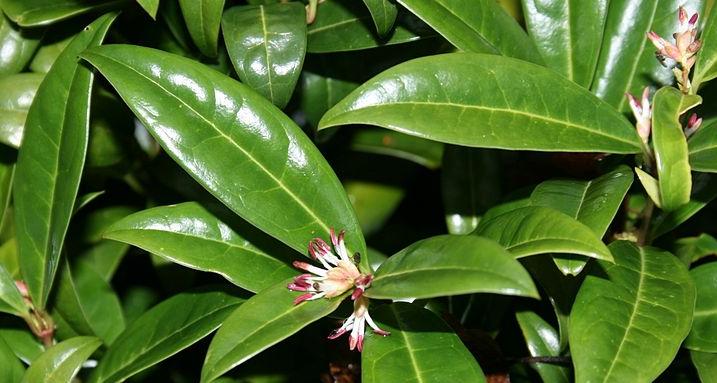 Perhaps the easiest winter-flowering shrub to grow that has sweetly perfumed flowers is Mahonia.  Its adaptability and vigour is one of the reason you see it everywhere in municipal plantings and supermarket carparks.  But don’t let that put you off: it is a superb plant. 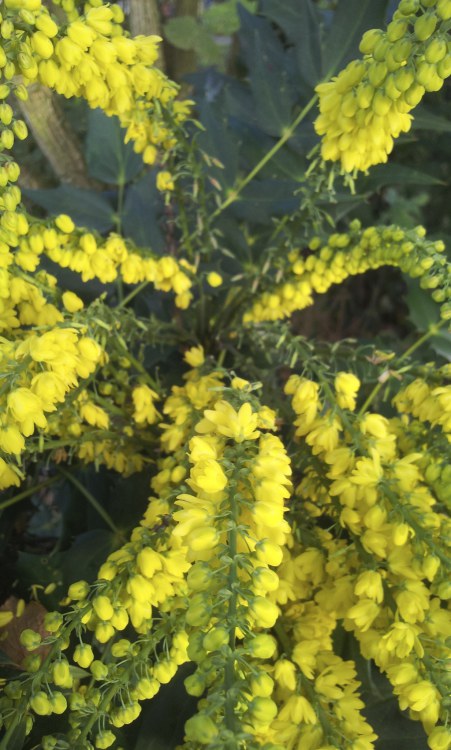 The flowers of  witch hazel, Hammemelis mollis, are just as scrawny but much more evident, being produced before the leaves. Both H. mollis and its larger-flowered cousin, H. x intermedia have a wide range of flower colours, from the soft yellow of H. mollis ‘Pallida’ to the rich red of H. x intermedia ‘Jelena’.  All have a clear, crisp honey perfume.  Just as sweet, but more fruity, is the scent of  Abeliophyllum disticum.  Its white, Forsythia-like flowers open in January but, like the Hammemelis, can be damaged by late frosts.

Frost-damage to flowers is worst on plants that are in an east-facing situation.  Flowers that have been chilled through the night are killed when the rays of the rising sun hit them in the morning.  Try to site shrubs where flowers can gently thaw through the day.  Text-book wisdom has it that Abeliophyllum needs a south facing, sunny place to thrive but I have seen it growing well against a north-facing wall where its flowers are never damaged by sudden rises in temperature.

One shrub that definitely needs mollycoddling is Oemleria cerasiformis.  If you can find a protected place for it, away from winds and frosts, you will be rewarded with aromatic white catkin-like flowers.  For me their scent is reminiscent of apricots, but I have heard people say it reminds them of almonds.

Much tougher, and easier to find in nurseries, are the Viburnums.  The clusters of hyacith-scented pink flowers have made Viburnum x bodnantense ‘Dawn’ a popular winter-flowering shrub.  It will grow to over 3m tall and almost as wide, so think carefully about where you plant it.  More upright, and not as tall is Viburnum x farreri ‘Candidissimum’  The snow-white flowers are just as deliciously fragrant but with a spicier scent. 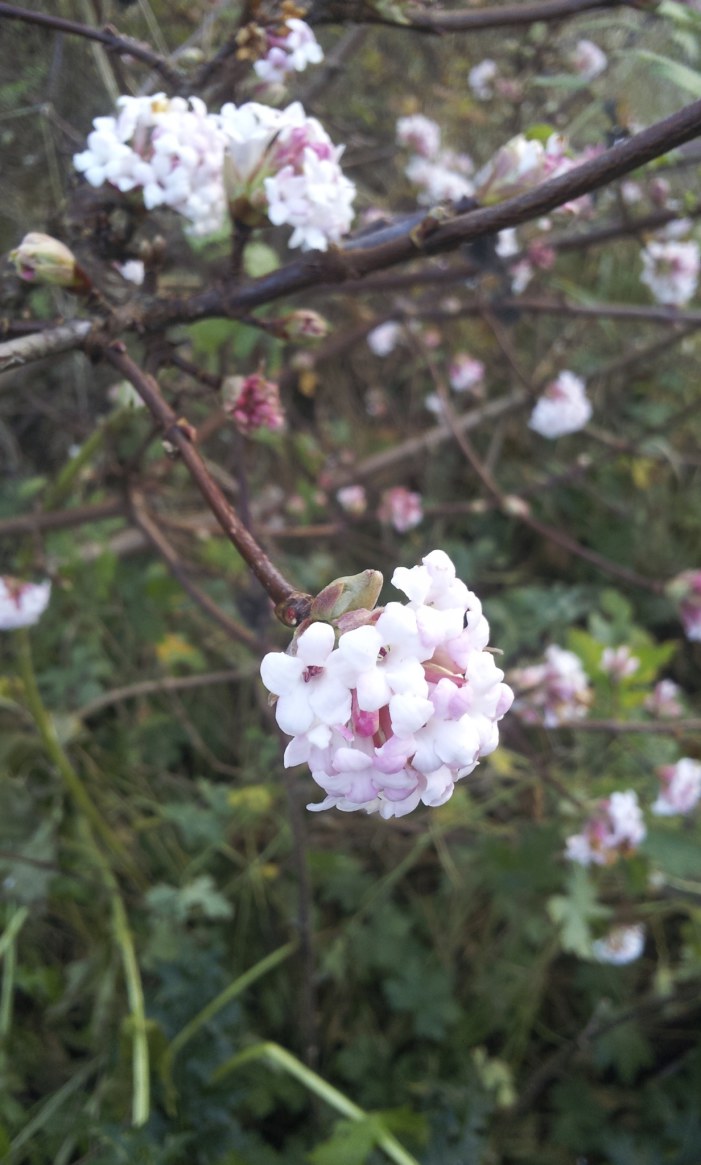 My own favourite shrub at this time of year is Edgeworthia chrysantha, which has creamy yellow balls on the ends of its stems.  The scent is masculine and musky like the interior of an old-fashioned gentleman’s perfumery.  Mine were bought as half-standards about three feet tall and I keep them in pots so that in winter they can be placed where I can best appreciate their scent.  For the rest of the year Edgeworthia are, frankly, very dull shrubs, so they are stood at the back of the borders.  Lonicera fragtantissima also has the drawback of being uninspiring for ten months of the year, but I allow it space in the garden just so that I can enjoy its honeysuckle scent during December and January.

As winter moves towards spring, bulbs and perennials with scented flowers start to appear. The Algerian iris, Iris unguicularis, will flower on and off throughout the winter if the days are mild and sunny.  They may sulk for a few years after they have been planted, and will produce most flowers in a poor soil that gets baked during the summer. The lavender-coloured flowers are fragile and often torn by wind and rain, but will last several days in a vase indoors.  There is a pure white form, but it is a weedy plant that rarely bothers to flower.

Much more floriferous is a cultivar with pale lilac flowers, I unguicularis ‘Walter Butt’.  Their sweet scent is not as strong as some of the shrubs, so you will need to get down on your hands and knees to smell them.  Even on a cold day it’s worth the discomfort.  And while you are down there have a sniff at the snowdrops, particularly Galanthus elwesii and any early-flowering crocus.  One deep breath in and you will forget the cold and your dirty knees, and be transported to the summer, to lilies, to roses and to sweet-peas.