Soldiers and Sailors. Joseph and Mary. Spotted Dog. Jerusalem Cowslip. Lungwort.  When a plant has so many common names (and these are just a few) you know that it has been widely grown and much admired.  Pulmonaria is the genus that the names refer to, and it has been grown in British gardens for centuries.  Its charm lies partly in its early flowers, most of which start off pink and fade to blue and also in the almost infinite variety of its foliage – plain green, mottled, speckled, splashed and silvered.  Pulmonaria are also robust, reliable and easy-to-grow: qualities which endear any plant even more closely to a gardener’s heart.

Pulmonaria are promiscuous plants that vigorously self-pollinate and hybridise, the result of which is that there are far too many named varieties, often with little to tell them apart.  This similarity extends to plants in the wild, and botanists disagree about how many species exist, with the number varying between a dozen and eighteen.  All of them are found in Europe and parts of Asia where they grow on the edges of deciduous  woodland.

All pulmonaria flower in the spring, before their leaves appear.  Although there are usually some remnants of the previous year’s foliage evident when the plants begin to flower, the new foliage starts into growth as the flowers die back.  The flower stems usually have small leaves attached to them but these are not typical of the main flush of foliage that follows.

The first to flower (in December if the weather is mild) are the Pulmonaria rubra cultivars. These differ from most other species in having plain green, rounded leaves and flowers that do not change colour, remaining coral-red throughout their lives.  Pulmonaria rubra ‘David Ward’, a cultivar introduced by Beth Chatto,  has white edged leaves.  The leaves scorch in the sun and in the wind but if you can appease this temperamental aspect of its disposition, it is a beautiful plant. 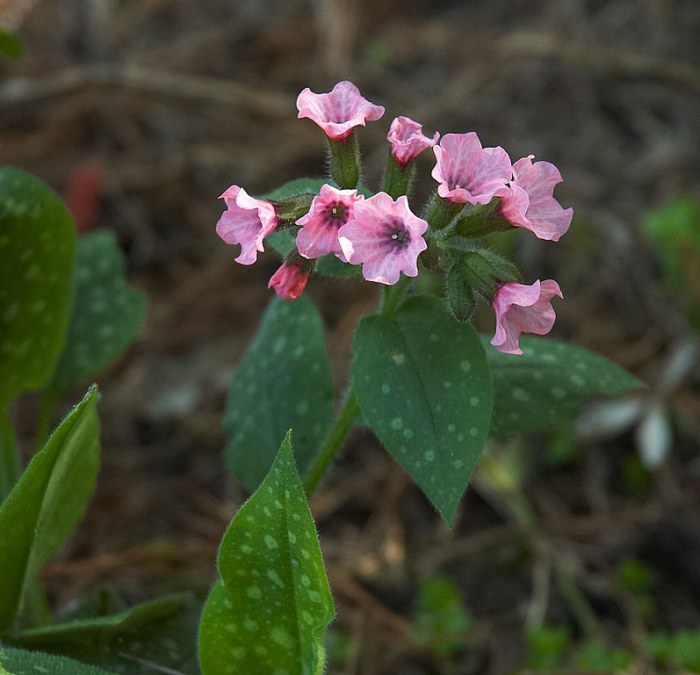 Pulmonaria longifolia has the long, narrow leaves usually associated with the genus.  One form, found in southern France, P longifolia subsp cevennensis, has silvered leaves that are about 45cm long.  P. longifolia will grow in sunnier situations than other pulmonaria and dozens of selections have been made from this species.  For me the most attractive is P. longifolia ‘Ankum’ which in spring has a dome of bright flowers.

The best blue pulmonarias tend to come from the Pulmonaria angustifolia cultivars. Plants in this group all tend to have unmarked, dark green foliage and purple-blue flowers.  The hybrid Pulmonaria ‘Blue Ensign’ has the darkest blue flowers of any pulmonaria.

The old cottage-garden plant is P. officinalis, with coarse, hairy leaves and the classic pale pink and pale blue flowers.  Although it is vigourous and floriferous it is susceptible to mildew and most of its old cultivars have been superseded by healthier hybrids.

Until modern plant breeders started to work on the genus, the pulmonarias with the most captivating foliage were cultivars and hybrids of Pulmonaria saccharata.  The leaves tend to be small and rounded with regular silver or pale-green markings.  P. saccharata ‘Dora Bielefeld’ has rose-pink flowers and apple-green leaves that are spotted with grey.

Over the years I have planted lots of varieties of pulmonaria amongst hellebores and spring-flowering bulbs under a row of hazels.  I’ve left them alone for years, and looking at them now I’ve no idea what any of them are.  The labels are long faded and there are seedlings everywhere, even under a walnut tree where conventional wisdom has it that nothing will grow.  If you want to keep you plants pure and true you should cut the flowers as soon as they are over, before they set seed.  As for me, I’m happy with my hotchpotch carpet of green and grey and silver leaves covered with spots, speckles and splodges and dotted with pink and blue jewels. 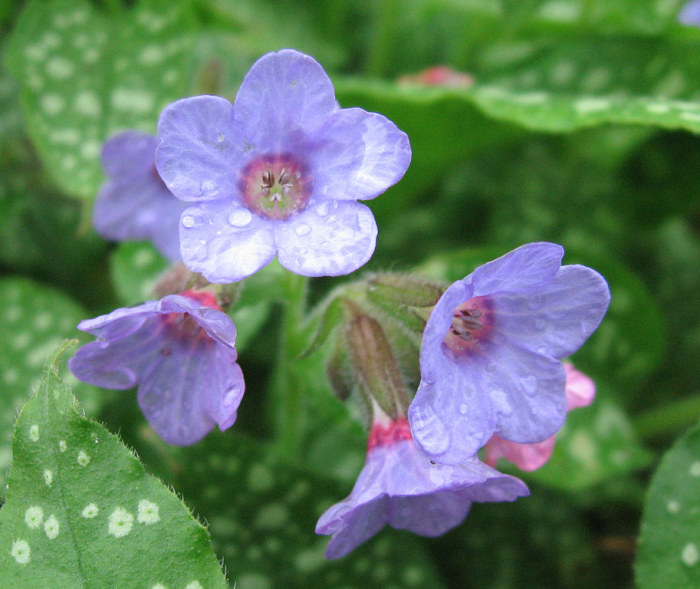 For pulmonarias to thrive, they need cool, moist growing conditions, preferably in dappled shade.  They will not grow in dry, baked soil.  When you first plant them dig as much leaf-mould or compost as you can into the planting hole and water them well for the first few weeks.  If you have enough leaf-mould, mulch around the crown of the plant each year.

Mildew can be a problem during the summer, but this is usually a sign that the plant is too dry.  If it happens every year it probably means that you are trying to grow your pulmonarias in the wrong place.  Try improving the structure of the soil or move them somewhere damper if you can.  Cutting off the diseased foliage (use shears and cut down to the ground) will encourage a fresh crop of leaves.  Burn the leaves you cut away, don’t put them on the compost heap.  Pulmonaria ‘Blue Ensign’ always seems to get mildew, no matter how well it is grown.  Either live with it or cut the affected leaves back in the summer.

I get rid of the previous year’s foliage in the winter, before the new flower stems start to grow.  The leaves tend to have a central vein that is too strong to be cleared away by hand, as you would the dead foliage of other perennials.  Once again, cutting the foliage back with shears is the most effective way of tidying the plant.

Until recently new pulmonaria hybrids have been the result of keen-eyed gardeners spotting an interesting seedling and propagating it for the rest of us.  Vita Sackville-West found Pulmonaria ‘Sissinghurst White’ in her garden and Bob Brown spotted P. ‘Diana Clare’ amongst a clump of plants on his nursery.

A new generation of plant breeders have turned their attention to the genus.  In France Didier Willery introduced Pulmonaria ‘Majeste’, whose silver leaves inspired others to produce plants with similar foliage.  A decade later Willery came up with a hybrid, Pulmonaria ‘Samourai’, that has silver leaves that are 45cm long. 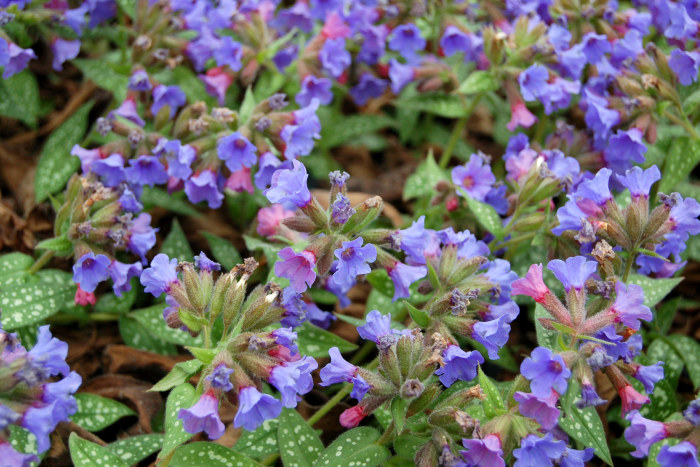 The most systematic and extensive breeding of pulmonarias has been done at the Terra Nova in America by plantsman Dan Heims.  In the past decade, Heims has introduced a dozen varieties that have then been micropropagated to ensure world-wide distribution.  The plants cover the range of pulmonaria forms from the silvered-leaves and white flowers of Pulmonaria ‘Moonshine’ to ones, such as Pulmonaria ‘Trevi Fountains’, that have speckled foliage and cobalt-blue flowers.