OOne gardener’s ‘invasive pest’ is another gardener’s ‘good clumper’.  I’m happy that this bulb spreads rapidly and easily: it’s a bright and gay flower that quickly dispels the drabness of the past few months.  I first saw it in the abandoned garden of a derelict house where thousands of its stars magically covered the ground.  There is a large-flowered white form and several cultivars with dark-blue flowers but I prefer the simplicity of  the pale blue ones.  The leaves die back soon after the plant has finished flowering, which is from mid-March to April.  If you are worried about it running amok, grow it in wide terracotta pans.  They are indigenous to south America but have become naturalised around the Mediterranean. 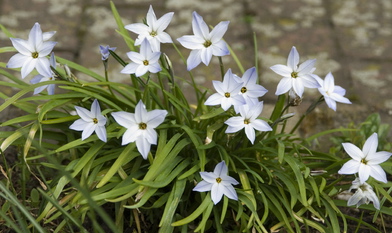 There are several attractive cultivars. I. ‘Alberto Costillo’ has much larger flowers than the species that are bright, sparkling white. 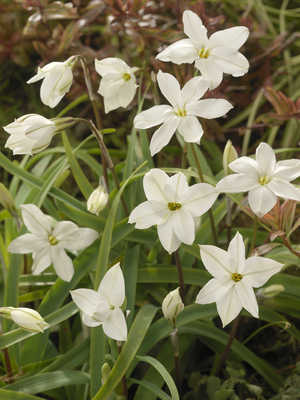 Of the dark-blue forms both I. ‘Rolf Fielder’ and I. ‘Froyle Mill’ have flowers that are a good, intense blue.  There is a pink-flowered form called I. ‘Charlotte Bishop’ but the flowers are a mucky pink and its not a particularly vigorous plant.