The sense of wonder at the inexplicable magic that transforms a tiny seed into a beautiful plant is familiar to every gardener.  Usually when we are sowing seeds we have a reasonable idea of what sort of plant to expect but sometimes someone gives us seeds to try in our own gardens and we don’t really know what we are sowing.  When, ten years ago, another gardener pushed some seeds of an umbellifer into an old envelope for me, I had no idea what to expect.  Often ‘sow it and see’ plants can be disappointing and this one seemed particularly uninspiring, producing just a few miserable ferny leaves in its first year.  Another plant to forget, I thought.  The following year, however, my disinterest was rewarded by a plant that is now amongst my favourites.

Seseli gummiferum has beautifully delicate silver-grey foliage on a thick stem, reaching up to four feet tall.   It sends out arms dancing, Shiva-like, in all directions; at the end of each a tight white bud unfurls into a flat umbel of white stars.  The young flowers have a pinkish hue that is subtly echoed on the stem at the base of the leaves.  The whole effect is one of subdued elegance; the plant is upright, poised and what garden designers like to describe as ‘architectural’.  The silver sheen of its foliage appear to be bathed in moonlight – which may be at the origin of one of its common names of ‘Moon Carrot’.  It is one of the many members of the Umbellifer family that I wouldn’t be without. 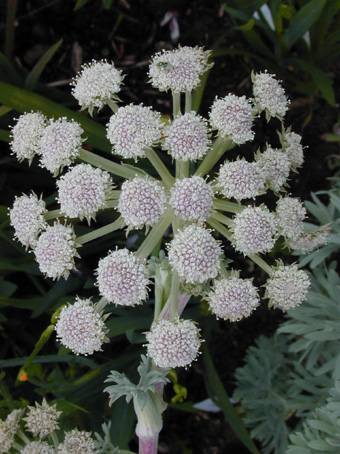 To be happiest Seseli gummiferum needs well-drained soil in a sunny position.  It is a biennial and when happy will seed itself about. Occasionally, it will forget itself and act as a perennial but this memory lapse is always short-lived so to be sure of more plants collect the seed and sow it yourself.  Like most umbellifers it is best to sow the seed fresh and plant it out in the garden the following spring.