In early summer it is hard not to be overwhelmed by the choice that flowering plants offer.  There’s a surfeit of them, all shouting-out for a place in your garden.  Its the brash and blousy ones that have, in recent years, most appealed to gardeners – all hot colours and exotic foliage.  But you can quickly tire of pyrotechnics and find yourself needing some respite from the brouhaha of bold plants.   I look to the easy charm of the herbaceous potentillas to bring a bit of modesty and gentleness to the garden.

Once the sweetheart of many gardeners (William Robinson found them ‘indespensable’ and EA Bowles wrote that he always wanted more), they have since been pushed out of  many gardens.  Christopher Lloyd writes that he no longer grows potentillas  and there is certainly no room for them amongst the tough boys used in European-style perennial plantings.  But they are easy to grow, floriferous , long-flowering and, above all, attractive. There are few gardens that wouldn’t be enhanced by them.

With more than 350 species from all over the northern hemisphere there are many that are too invasive, too small or too insignificant get through the garden gate.  But the genus does include many excellent species.

P. atrosanguinea is typical of the genus, with lobed leaves, very similar to those of a strawberry plant, and saucer-shaped, simple flowers about 2cm in diameter.  Generally the flowers are deep red but there is a lot of variation in flower colour in the plants that you will find for sale.  Some nurseries sell a very good-looking dark, almost chocolate-coloured, form.   Its long-flowering is characteristic of  herbaceous potentillas, starting in late May and continuing throughout the summer until August.

P. agrophylla  has neat, low clumps of silvered leaves with tall (45cm)  stems that carry masses of yellow flowers  at the end of the summer.  You’d think that with such a clear yellow at the end of the summer on a compact plant it has everything going for it; but it goes and spoils it all with its fecundity, seeding itself everywhere to the point of being a pest.  A few years ago  I planted it in a low wall, where it looked magnificent.  Unfortunately its progeny started to smother its neighbours and insinuate themselves into every paving crack around.  I pulled out the parent plant and am still trying to get the better of its seedlings.  Better to forgo its charms than be swamped by it.

Further west along the Himalayas from where P. agrophylla grows is a much more garden-friendly plant. For Graham Stuart Thomas the carmine flowers of P. napalensis ‘make a gay garden picture’ but it’s the cultivars of this species  that are more usually grown in gardens now.  ‘Miss Willmott ‘ has soft pink flowers, while on ‘Ron McBeath’ they are a much stronger, carmine pink with a red centre.  On ‘Helen Jane’ the flowers are such a pale pink that in strong sunlight they look almost white.  The combination of the pale pink petals and a strawberry red centre makes a charming flower. Most of  these cultivars tend to grow to about 45cm tall and have a tendency to straggle but ‘Shogran’ is a very neat, compact form that grows to about 20cm tall.  It has carmine flowers that have a pale edge to the petals.

As well as its own attractions P napalensis is a parent of perhaps the most beautiful herbaceous potentilla for the garden. Two hundred years ago an encounter between P. napelensis and P. recta resulted in a hybrid that falls into the category of  ‘if you only grow one potentilla grow this one’. P x hopwoodiana, as it was named, has flowers 2cm wide that consist of five pale-pink, heart-shaped petals with a raspberry-jam centre.   Most potentillas flower during the summer and early autumn but hopwoodiana will start at the beginning of May and is still be doing its thing in August.  Being sterile it has no mechanism for telling itself that once pollinated it can stop producing flowers.  The flowers themselves are clustered at the end of its 45cm long stems.  For some people this makes it a sprawling, untidy plant but I find its habit of flopping around and popping up through other plants very attractive.  In my garden it grows through the beetroot foliage of Sedum ‘Purple Emperor’ while another clump grows over and hides the dying foliage of  an oriental poppy.  Despite the popularity of the plant the identity of  the eponymous Hopwood remains unknown.

Another favourite potentilla is a cousin of x hopwoodiana, also having P. napalensis as one of its parents.  P. x tonguei is often sold as an alpine plant and you may find it at nurseries and garden centres in small 7cm pots.  In fact it is a prostrate, expansive plant suited as much to the border as to alpine beds.  I’ve even seen it tumbling out of an adventurous hanging basket.  The flowers are a rich apricot with a deep red centre and if you shear back  the wiry stems when the flowers are over you will get another flowering in the autumn.

The potentilla species are very promiscuous and have produced a range of cultivars.  ‘Gibson’s Scarlet’ has bright scarlet flowers 3cm wide on a plant 50cm tall.  ‘Goldrausch’ is only half that height but its golden yellow flowers are just as large.

Most of these  cultivars date from the beginning of the last century.  In the 1880’s French nurseryman and plant-breeder Victor Lemoine listed over fifty varieties of potentilla in his catalogue.  His introductions became popular both in Europe and in North America.  The flowers of Lemoine’s potentillas tended to be large, often double and in yellows, reds and purples.  Some are still widely available from specialist nurseries.  ‘Etna’ has deep crimson flowers; ‘William Rollisson’ semi-double orange ones with a yellow edge to the petals.

Lemoine’s first introduction was ‘Gloire de Nancy’, which you can often find for sale in nurseries and garden centres.  What you are buying , though, may not be what Lemoine bred.  Described in 1854 as a pure yellow, semi-double it was, by the 1970’s, in a Blooms of Bressingham list, ‘rich orange with crimson shadings’.  Today you can find a range of  yellow and orange potentillas with that name.

While a few may have survived, most of Lemoine’s selections no longer appear in nursery catalogues, having, over the years, become victims of gardening fashion.  One can only wonder whether ‘Velours Pourpre’ matches Lemoine’s tempting description of ‘having velvety dark-purple flowers’.  What was it about ‘Vesuve’ that made it EA Bowles’ favourite?  Did ‘Congo’, another double which had maroon-black petals with the occasional golden one mixed in, look as attractive as it sounds?  Alas, we are never likely to know.  These cultivars are long gone. 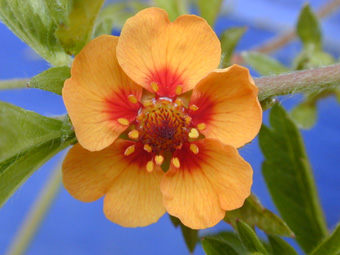 Potentillas are tough, easy-to-grow  plants that are not susceptible to pest and diseases.  They prefer full sun in well-drained soils. Don’t feed the soil too much as this will produce lush and leggy plants with few flowers.  They seem to flower best when the soil is kept lean.

Propagate by dividing, which I do in early spring.  Dig the plant up and cut down into the woody crown of the plant with an old bread knife. Replant the pieces straight away in the garden or pot them up and keep them in a cold greenhouse until you are ready to plant them out.