Britain’s love affair with its most popular summer-bedding plant began in the mid-seventeenth century when gardener and plant-collector John Tradescant acquired his first pelargonium. During the next three hundred years the plant was improved,  bred and hybridised, to result in the gaudy, large-flowered plants that tumble from hanging-baskets and adorn traffic islands everywhere.  Their wild ancestors, however, possess a delicacy and elegance not found in modern hybrids.

There are about 230 species of pelargoniums, and the genus includes annuals, bulbs, shrubs, succulents and perennials.  Tradescant’s prized plant, which managed to survive the journey to Europe from South Africa, home of over eighty percent of pelargonium species, was P. triste.  In the wild the small flowers tend to be dull brown, but those in cultivation are a much brighter cream-colour.  The real joy of this plant, though, is not in its flowers but in its scent: as the sun goes down the tiny flowers release a sweet perfume, filling the night air all around.  It is hard to believe that such small flowers can produce so much scent. 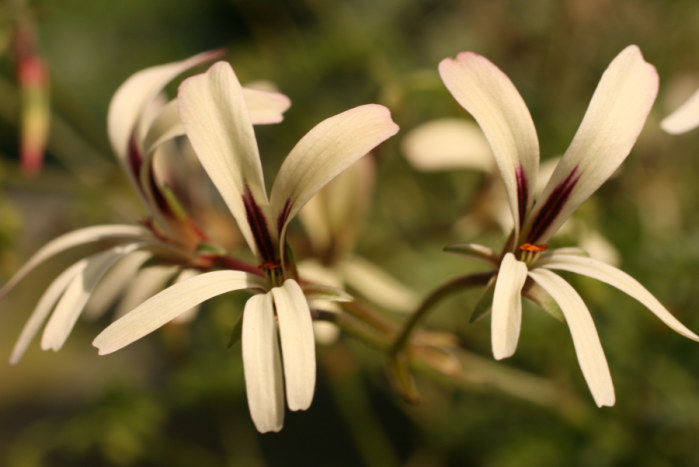 Other pelargoniums that have scented flowers include the strange-looking P. gibbosum, that has succulent-like stems with fat leaf-joints reminiscent of a succulent.  The sprays of flowers at the end of each long stem are unusual in that they are yellow, a colour that modern breeders have not yet been able to introduce into Pelargonium hybrids.

Pelargoniums tend to be long-flowering and floriferous. P. ionidflorum is smothered with a cloud of magenta flowers from April to October, and only stops flowering when it is cut down so that it can rest during the winter.  Likewise, P. abrotanifolium only stops flowering when cut back. This plant has sprawling stems of tightly-packed silvery leaves and white flowers that make it ideal for growing over the edge of containers. 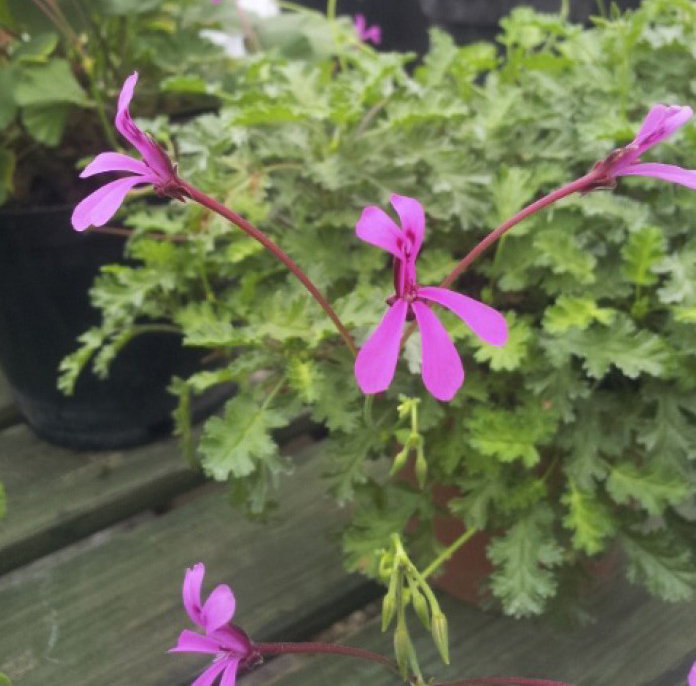 Spreading stems are a feature of many pelargoniums. I train the long, succulent-like stems of P. acetosum over 1m tall wicker structures to create a pyramid of bright pink flowers.  There is also a variegated form of this plant, P. acetosum ‘Variegata’ with even brighter pink flowers.

Where space is limited, consider growing a more compact species such as P. sidoides, which has heart-shaped grey leaves that have a silvery sheen, and sprays of dark-purple, almost-black flowers.  Despite its delicate demeanour this is a tough plant that is hardy in milder parts of Britain.

The leaves of Pelargonium show almost-endless variety of size and shape: fat globes; finely-cut and fern-like; tiny ovals a few millimetres wide; broad velvet plates 10cm long; and narrow spear-shaped points.  Amongst the most beautiful foliage is that of P. lanceolatum, whose glaucous spear-shaped leaves stand to attention along the plant’s stems.

Many pelargonium species have scented leaves that release their perfume as you brush past them.  The soft, grey leaves of P. fragrans have a nutmeg-and-spices scent when they are rubbed.  Small and compact, it is at home in containers and bedding schemes during the summer and can be brought inside during the winter to be used as a house plant.  A much larger scented-leaved species is P. tomentosum, whose grey felted foliage can reach 1m wide.  The leaves are perfumed with peppermint.  Unlike most other pelargoniums, P tomentosum is happiest when grown in shade.

Pelargoniums rarely hybridise in the wild but gardeners have crossed several wild forms to produce beautiful plants.  The result of crossing two species are known as primary hybrids, and the most popular of these is P. ‘Ardens’.  With flowers the colour of glowing embers, it has created a longing in gardeners that until recently nurserymen have been unable to fulfil, but modern methods of micro-propagation now mean that is widely available and affordable.  P. ‘Schotti’ is another result of crossing the same parents as those of  P. ‘Ardens’, this time producing mounds of green ferny leaves and sprays of soft red flowers. 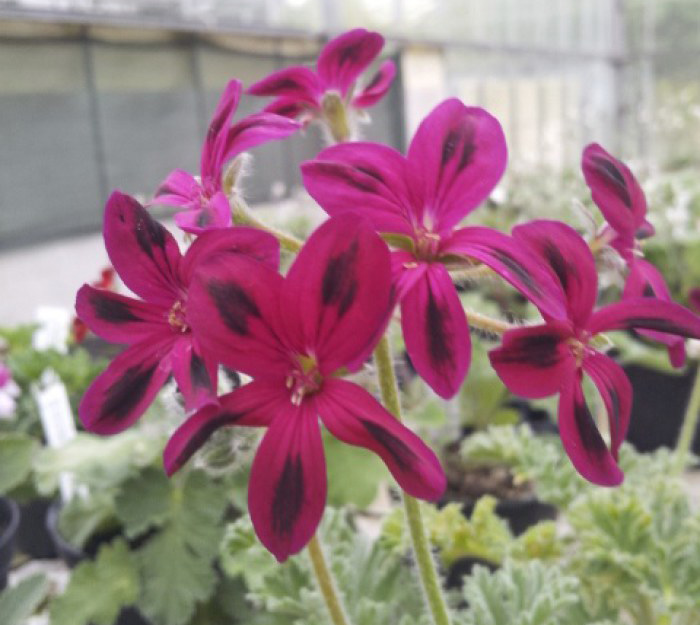 The names pelargonium and geranium have been confused by gardeners for the last 150 years.  What many people think of as geraniums are, in fact pelargoniums.  In general, geraniums are hardy, herbaceous plants and pelargoniums are tender plants that will not survive British winters outdoors.  Looking closely at the individual flowers of both these plants clearly shows their difference. Geranium flowers are made up of five identically-shaped and regularly space petals; pelargonium flowers consist of two upper petals and three lower ones.

The fundamental requirements for vigorous, healthy and floriferous pelargoniums are a well-drained compost, good air circulation around the plants, lots of light in summer and a dry, frost-free winter.

I prefer to grow mine in loam-based compost, because peat and coir-based ones retain too much moisture and can lead to the plants rotting.  To improve drainage even further mix the compost with 25% by volume of horticultural grit. During the summer, water when the compost is dry.  If you are not sure whether to water or not, then don’t:  pelargoniums are more damaged by over-watering than by drought.  Very little watering is needed during the winter – perhaps once a month.

Store the plants in a frost-free greenhouse or cold-frame during the winter, after first cutting the plants back by two thirds of their size.  This can seem harsh, particularly if the plant is still flowering, but will produce a bushier and healthier plant for next year.