Lilies have been grown in European gardens for centuries, during which time they have come to symbolise the modesty and piety of the Madonna.  Why this should be is puzzling, because lilies are flamboyant plants with absolutely no modesty.  Heads held high, they are the peak of midsummer exuberance, after the iris and the peonies have finished.  And nothing will bring more glitz and glamour to a patio than a few pots of lilies.

Traditionally lily bulbs have been planted either in late autumn or early spring.  I always plant mine in the spring: lilies hate being wet, so sitting in the garden during the increasingly mild and wet winters that we now have is not a good start for the bulb.

The majority of lilies are very easy to grow and very long-lived.  Always start with the healthiest bulb you can find. When you buy them they should be fat and plump – don’t even look at ones that are shrivelled and desiccated.  Their most important requirement is good drainage.  You can’t grow lilies in heavy or wet soil.  If that’s what you have,  either dig in lots of grit when you plant them, or grow them in pots.  Plant the bulbs in groups about 10 cms deep and 30cms apart. 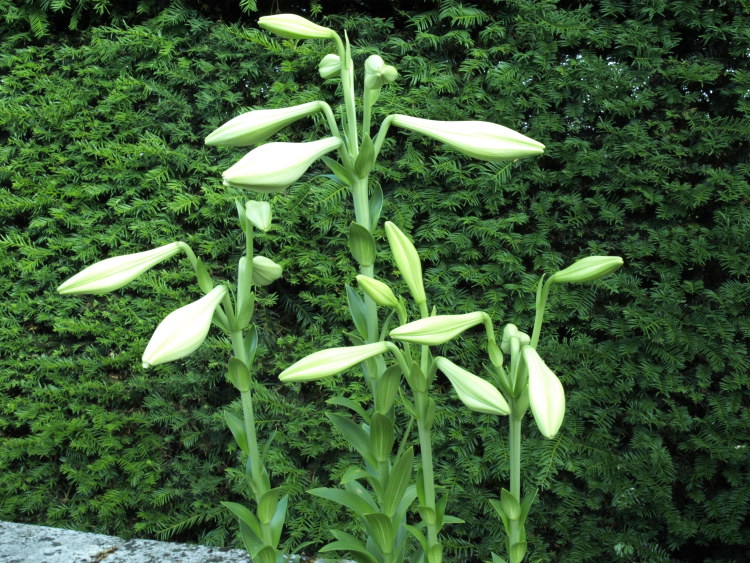 The fat buds of Lilium longiflora about to burst open.

The easiest lily to grow, L. regale, is also one of the most spectacular, with up to ten trumpet-shaped highly-scented flowers.  The buds are wine coloured  and open up to white flowers with a yellow centre.  Flowering during July and August, it will tolerate heat and drought and, if left in the ground, will form large clumps about 1.5m tall.  Its scent, beauty and toughness have been bred into other so-called ‘Trumpet’ lilies.  L.‘African Queen’ has large burnt-orange flowers that look particularly spectacular when grown in front of a brick wall.

The Asiatic hybrids flower early, during June and July.  These are the small-flowered lilies that you see plastic-wrapped on petrol-station forecourts.  It’s an unjust end for such a beautiful and undemanding plant.  They don’t have the scent of other lilies but they do have strongly-coloured flowers.  The bright-red L. ‘Marakesh’ is only 1m tall but is floriferous and tough. For the first time this year I am growing L. ‘Ebony’ – which has sumptuous deep maroon flowers with a silky sheen to them.

While the Trumpet and Asiatic lilies need full sun, there are lilies that need the cool, shade and acid soil of a woodland. The candelabra of L. martogon’s downward-facing flowers is a feature of woodlands from Europe to Korea, and brings a delicate elegance to shady gardens.  If you have the right conditions (and don’t bother trying if you haven’t) grow L martagon with the trumpet-shaped L. napalense.  The unusual greenish petals roll back to show off a deep chocolate centre.   It’s a striking flower that, due to its underground runners, will pop up in unexpected places. 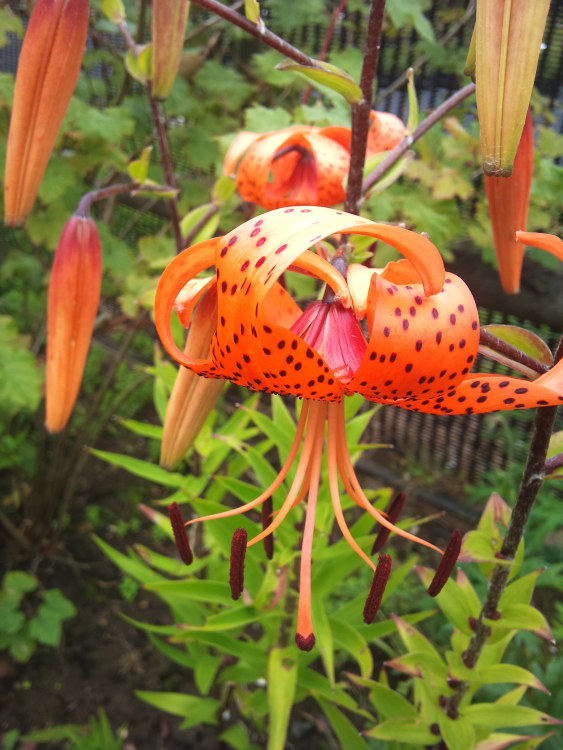 The Tiger Liliy, Lilium henry is also at home in alkaline soils.  The bright orange flowers with distinctive speckling are very very dramatic.  Like many lilies,  it produces little bulbils in the leaf axes that can be potted up and grown on.  It takes about two years for them to flower.

Until recently lilies were trouble-free plants to grow, but now they have their own nasty pest; the lily beetle.  The attractive, shining-red coat belies its destructiveness.  A small group of lily beetles can chomp through a patch of lilies in a single day, added to which their larvae is disgustingly like bird droppings.  They are all over the south of England and have just started to appear in Wales.  The rest of you better watch out: they are on their way.  The beetle also attacks Fritillaria.

The organic way of dealing with them is to pick them off and squash them.  Be stealthy, because the slightest shake of the plant sends them tumbling to the ground where they fall on their backs, black underside up, making them impossible to spot.  I found picking the things off every morning and evening did not get rid of them, so I have resorted to chemicals.  A proprietary lily-beetle killer, it’s the only chemical I use in the garden.  The effect is dramatic.  My lilies are, once more, healthy and exuberant –  the stars of the garden in summer.

Compost in pots can become waterlogged, which will kill lilies, so good drainage is essential.  Multi-purpose composts are too claggy, so I mix my own using one third each of multi-purpose compost, horticultural grit (not sand) and loam-based compost (John Innes no 3).  The bulbs need to be planted with 8-10 cms of compost on top of them.  I plant three bulbs in a pot 30cm diameter.  You can buy tall terracotta pots specially designed for lilies, but I use plastic pots that I drop into smarter terracotta ones.  Lily bulbs like to be cool, even when their flowers need to bask in the full sun.  Because pots warm quickly, try and mask the base of lily pots with other plants. When the lilies have finished flowering I cut off dead flowers and let the foliage die down naturally.  This diverts all the plant’s energy from producing seed to strengthening the bulb for next year.  I stand the pots amongst other plants in a cool part of the garden while they are dying back.  If you have a greenhouse you can store the pots under the benches during the winter to induce earlier flowering.