The snakeshead fritillary is a very frustrating plant. For those who have a garden which meets its very specific conditions it will produce masses of healthy seedlings; those who don’t will watch the bulbs they have planted dwindle and die.  There are no half-measures: if you don’t have cool damp soil (or, ideally, a flood meadow) you can’t grow it.  But what a joy when the plant is happy!   The species has dark purple flowers on the top of 25cm tall, slender stems but is at its best when planted along with the diaphanous white form.  Each benefits from the other and together they sparkle. 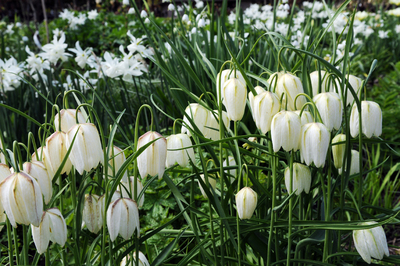 If you are growing them in grass, look out for the the curling rats-tail like stem early in the year.  These are seedlings that will take a year or two to flower but are well worth waiting for.  The flowers appear in March and April.  The plant is native to continental Europe and SOuthern England.  One of the most spectacular colonies is in the meadow of Magdalen College, Oxford, which takes on a purple haze when the bulbs are flowering in March and April