Plant catalogues are peppered with plants that will ‘grow anywhere’.  Beware – this suggestion is nearly always mistaken.   The truth is that there are very few plants that will thrive as well in deep shade as in bright sunlight, or that will tolerate baking dryness as much as they will deep shade.  Acanthus mollis is one of those few.  It seems to be able to adapt as well to the cold of northern Scotland as to the polluted, scorching streets of Athens. 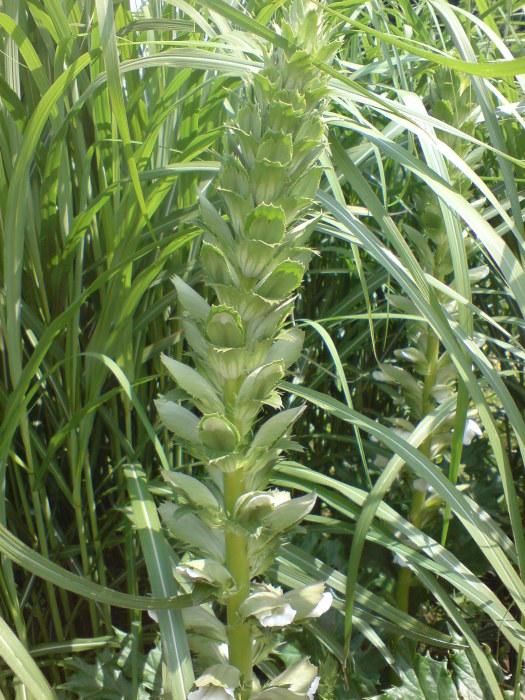 Widespread in ancient Greece, its beautiful glossy leaves, slightly ruffled at the edges,  inspired Corintian architects to incorporate them into the capitals of their buildings’ columns.  Since then the acanthus leaf has entered the design lexicon, but its representation often bears little resemblance to the actual leaf itself.  William Morris’ Acanthus-leaf fabrics and wallpapers, for example, show a stylised  evocation of the plant  which has little to do with botanical accuracy.

Broad and up to two feet long the leaves are gently lobed and rounded.  The veins seem to be stamped into the leaves, giving them the look of  pressed leather.  During the spring the spine of the unfurling leaves appear from the centre of the plant like a reptile breaking out of an egg.  In its apparent strength you can sense the powerful force that’s making the plant grow.  Nothing, it seems, could stop those leaves from opening.

Flowering varies considerably with the growing conditions. In dry, shady situations only the occasional flower spike will appear and rarely get to more than two feet tall; fertile soil and full sun will produce masses of flower spikes up to five feet.  The flowers are white, shielded by a spiky, smoked-purple hood. 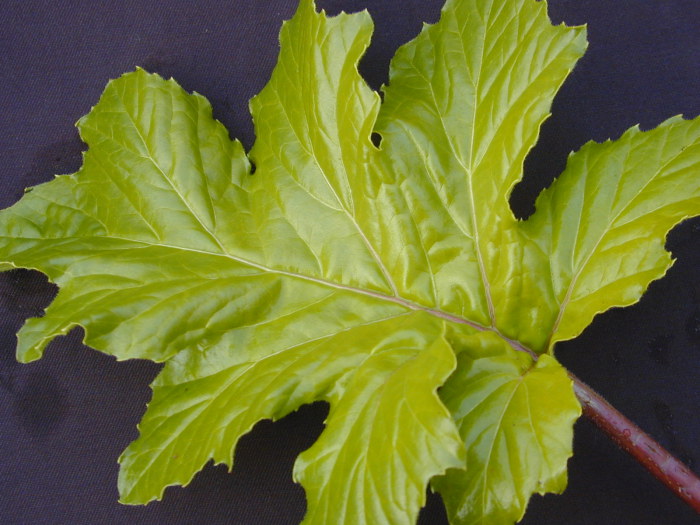 The best form of  Acanthus, Acanthus mollis ‘Hollard’s Gold’, arrived in Britain from New Zealand a decade ago.  In spring the leaves the new shoots are buttercup-yellow and open to an improbably glowing golden-green.  By the summer they have faded to chartreuse but still seem to blaze.  I use it to brighten the shady side of a yew hedge.  From France there is a cultivar with white flowers, Acanthus mollis ‘Rue Ledan’, which is sometimes sold as Acanthus mollis ‘Alba’.  The white flowers are very attractive against the pale green bracts.  Mine grows in front of Miscanthus sinensis ‘Malepartus’.